The symptoms listed above correspond to different stages of the disease. However, the clinical staging includes four stages instead of three. They are as follows: 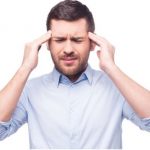